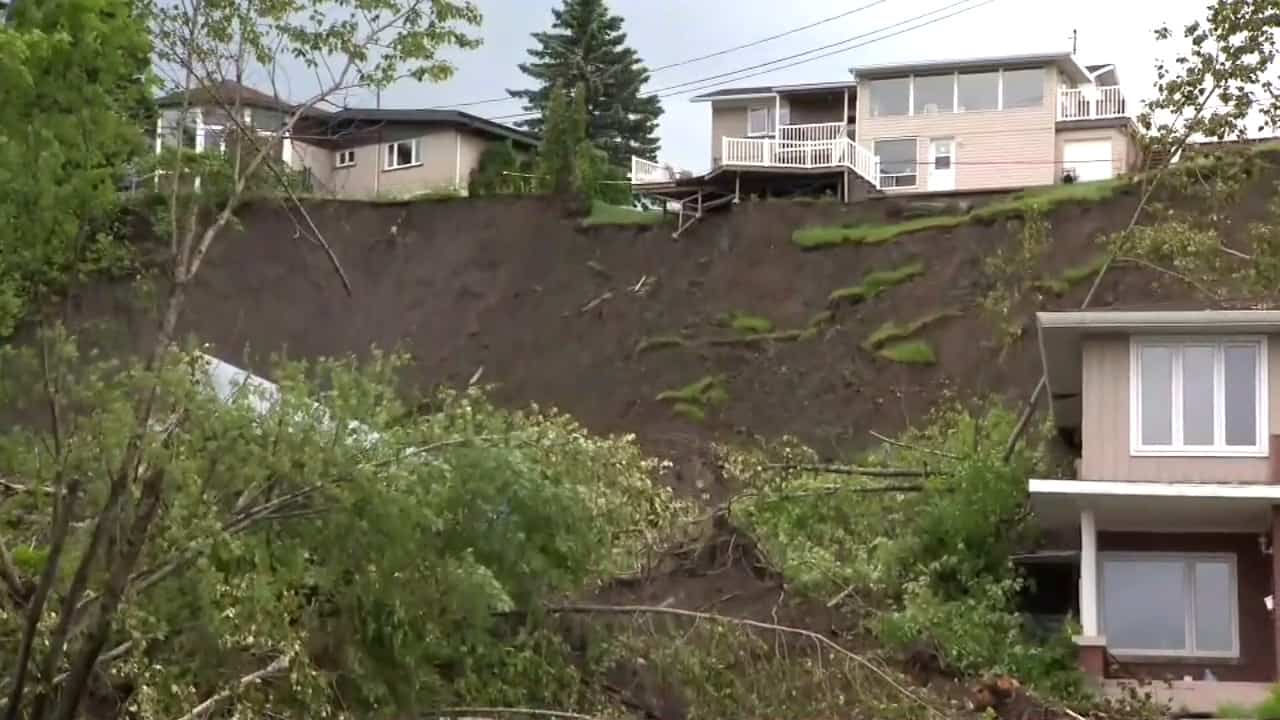 Security will be increased around the site where the landslide occurred in La Baie, Saguenay, where work, which was not initially planned, has been underway since Thursday morning to reinforce the dikes that have been built at the bottom of the slope.

The work should be completed next Monday when you return from the long holiday.

The crushed asphalt dikes that had been erected previously at the end of 8th and 9th avenues will be solidified.

“This is work to prepare for the major works that will begin soon to consolidate the slope permanently. It's really about going to consolidate what had already been put in to prevent leaks if ever there was a movement of the ground. So that the traffic at the bottom works well, to avoid evacuating wider, “explained Carol Girard, director of the Saguenay Fire Safety Department.

Since Thursday morning, the experts of the team of JP Poulin excavation has been busy adding nearly 500 concrete blocks in addition to 65 guardrails, commonly known as “jersey”.

“What we are doing in the end is to bring together all the dikes to compensate for any shortcomings that there may be. So we're going to install concrete blocks between the houses to prevent it from going down. And we will also surround the dikes all along the road with jerseys, so smaller blocks to be able to surround all that to ensure that if there is a movement of the ground, it will be much safer, “said clarified Mr. Girard.

A man watched the experts at work from afar and cast many glances up the slope. He used to live in the area long before the events took place.

“I lived there several years ago and I imagine that could have happened to me. It’s really imposing,” he explained.

“It's surreal to see so much work like this!” exclaimed a man who was looking at his daughter's house, where the experts were busy laying down many concrete blocks.

“I didn't think it was going to be like this. And if they're doing it that big, it's because there's really something bad that can happen,” he added.

The risk that another landslide to occur is actually always imminent. However, the director of the Fire Safety Department is reassuring.

“It is certain that as they progress with the work to level the slope, the risk will definitely decrease”, underlined Carol Girard.

Nearly 26 people can now return to their homes. The homes targeted by this announcement are located on Avenue du Port, 7e Avenue and 6e Rue.

According to the new data, the Ministère des Transports du Québec has stated that these residences are located at outside the ground movement zone and are therefore out of danger.

Four residences on the outskirts of the slope are still under analysis.

A clearer portrait of the scenarios envisaged should be drawn up during the week in order to know if the occupants will eventually be able to return to their homes, said Mr. Girard.

As for the five residences that will be demolished, the owners had asked if they could be authorized to collect personal effects.

“We are looking at this, it is a priority, but we cannot say anything, guarantee anything for the moment because it would be to give false hopes for nothing”, replied the director of the fire department.

< p>The state of emergency has also been extended by the City of Saguenay in view of the long leave.

“It's a work in progress and it's so tightly monitored. The experts are working on the file every day and as the situation evolves, we adjust,” mentioned Mr. Girard.

Consolidation work should resume and end next Monday.

Afterwards, the engineers will be able to work on leveling the slope in order to stabilize it permanently so that, eventually, the families who have still not returned to their residences can do so.

Experts are aiming for October, but as Mr. Girard pointed out, you never know what can happen.

Remember that a landslide is occurred in La Baie a little over two weeks ago, taking away a residence and forcing the evacuation of 76 families.